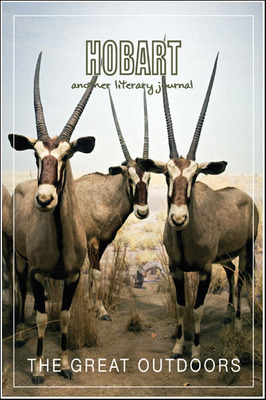 One of the best pieces of advice I’ve gotten on writing is also one of the simplest: let your fiction sit in a drawer (or hard drive) before reading it again. Here is Gardner’s version: “when the manuscript is ‘cold’ […] the faults stand plain” (On Becoming a Novelist, p. 65). The most savory variant went like this: writing is like cooking a stew; if you want to remove the fat, you have to allow the stew to cool off so that the fat will rise to the surface (I owe that one to Rafael Reig). The impression I got upon reading Hobart 11 (Spring 2010) was that it wasn’t allowed to cool off, and thus the undesirable ingredients were mixed in with the good stuff. That’s probably because it was a themed issue, so most contributors likely wrote their pieces according to the theme (the outdoors), and had to cut back on revisions in order to submit them on time. That doesn’t mean there aren’t good elements in the issue. There are.

Last time I commented on Hobart (here), I referred to each of the longer stories individually. I had thought of presenting a broader portrait this time, more impressionistic than detailed. But some of the longer stories do deserve a brief note. Again, the shorts were not great (Adam Peterson’s were the most engaging), so let me skim through the longer pieces.

B.C. Edwards’s “Evitative” presents an apocalyptic flood. The narrator, a woman, has escaped from it by living in the trees with an apelike, barely verbal man called Jo-Jo. A group of people drifts by, craving to snatch and eat them. The story was repetitive and slow, and it would’ve worked better as a much shorter piece. I liked how people spoke with a lisp because their teeth had been chipped off by chewing on bones. Clever. Details like that linger in readers’ minds.

Patrick Somerville’s “The Fish” is about Ben returning home to Montana to visit his mother, who had a stroke. He stumbles onto an old family friend, Carl, who may have had an affair with Ben’s mother. Carl had an accident years back that may have precipitated the ruin of Ben’s father. Carl’s incident, with a few tweaks, could’ve been the whole story. But the author is desperate to go beyond a good story and add a layer of psychological significance (see another example of the same thing). Even as the story stands, there was much to cut off, like the first couple of pages, with unnecessary warm-ups and explanations. The story takes off on page three, when Ben walks into a bar.

Becky Hagenston’s “The Lake” is funny and well paced, in my judgment the best story in Hobart 11. There are great dialogues, poignant scenes. David is a young man whose father, ruined and aging, has decided to move out into a cabin in the middle of nowhere. David has to drive over to his father’s to deliver a gun that was stashed in David’s house. We hear how David’s parents’ marriage dissolved, and how David’s own marriage, to a great character called Saffron, is fraying. Despite my praise, there are things to improve. Sometimes characters are described more than was needed. Take this: “‘I don’t know! How am I supposed to know that?’ His father is angry, nearly stomping his foot” (50). The dialogue was enough to show us that his father was angry. But if we were getting a description anyway, why not let the man just stomp his foot? Now notice this: “Saffron frowned and shook her head, disapproving” (52). Saffron’s body language is enough to convey disapproval. The final adjective was unnecessary. Taking a step back, the story did need a dash of focus: there was a strand too many. I would’ve suggested concentrating on David’s parents, instead of going through David’s own marital problems, which rear their head unbidden. A tighter, more focused story would’ve been marvelous. It’s still a strong piece.

Elise Winn’s “Picture Our Mother” is ably told and richly described. But if it referred once more to the narrator’s absent mother, I would’ve incinerated the whole magazine. It’s a story about two girls who grow up with an often-absent father after their mother abandoned them. Some images are good. But it really does the mother’s absence to death. More restraint with these references would’ve allowed the story to hatch into something good.

Gabriel Urza’s “Cold Travel” is a story with struggles and in which something does happen. (It sounds unnecessary to point this out, but stories are too often bogged down in the quotidian.) Urza is clever in withholding key information about the main character, something another story in the magazine (“The Fish”) would profit from. However, “Cold Travel” galumphs slowly to the climax, and its language is so bleached out that sometimes I had to prod myself along. Look at this sentence, for instance: “The stale autumn air trapped inside the cabin was warm and inviting” (81). Warm and inviting? Still, the ending stirred me with genuine interest. One of the best pieces in the magazine.

Mike Alber’s “A Deer Big Enough to Show” is about a guy who skins deer in winter and who’s desperate to get back together with his girlfriend; she dumped him a year before and is about to move in with a new boyfriend. The story sparked no interest in me at all. The characters were beyond my empathy. Also, the narrative slugged along. I tried to pinpoint reasons for this. In part, the pace was due to the abuse of participial phrases (e.g., “Men had gone in the woods before him, hunting for food and honor” [119]), often bundled with speech attributions and unnecessary descriptions (e.g., “‘It’s fine,’ she said, shutting him down with an unamused look” [116]).

Matthew Derby’s “A Minor Affordance” is a sci-fi tale involving a contest so elaborate and cruel that I wonder if it wasn’t eviscerated from a novel and gift-wrapped as a short story. The characters seem like debris scattered throughout a dystopian world that is the real interest of the author. The narrative tends to produce lyrical phrases that struck me as unnatural. And one wonders how the narrator could afford such a major dose of adjectives (e.g., “Black smoke roiled from a jagged cavity in the building’s sheer, mirrored surface” [134]).

Meghan Kenny’s “All These Lovely Boys” is narrated by a man whose son is a skydiver who dresses like a ballerina (both on and off the show). This has skewed the relationship between father and son, and led to the narrator divorcing his wife. The story is brief, and ends with the father witnessing his son’s skydiving show for the first time. The dramatic situations are narrated in a reluctant voice, almost deadpan, that made me doubt their verisimilitude. The marriage ended just because the narrator’s paternal love wasn’t instinctive and all-forgiving? Also, the story is slowed down by descriptions that interfere with the pace of dialogues, and by dry, specific accounts like this one: “Then Kirk moved the rock, rolled it on over in place, and sat on it, looked down at the ditch, and he leaned over and smelled a rose” (144). Note the abundance of prepositions, the dearth of short phrases strung together, and the repetition of over.

Shya Scanlon’s “Portrait of the Oughtist” presents an artist who paints a portrait of his father. The “Oughtist” is the father, so called because he “cloaked a command in the soft grammar of suggestion” (149). The father has divorced the artist’s mother and married a hippieish and likable woman. The narrative is too often glossed and flashbacked to allow it to develop a good rhythm. It moves on tiptoes. The opening feels out of place, tacked on: “His father had finally agreed to sit for a portrait.” Yes, the father accepts grudgingly, but the word finally implies a sustained effort of cajoling the man to agree, which is not evident. Plus, after the opening, the story jumps brusquely back to a different narrative moment; hence the sense that it’s tacked on. Furthermore, the story closely follows a painter, but it is not painterly in the least. Compare it with, say, David Michael Kaplan’s “Anne Rey” or Nam Le’s “Meeting Elise,” and you’ll note how well those stories handle the terminology and outlook of painters. The most technical you get in “Portrait of the Oughtist” is a reference to turpentine. That doesn’t feel true to character.

The last three stories are episodic and fragmented. They read like pieces of flash fiction drawn from a bag and laid out on successive pages. Eliza Tudor’s “Person, Place, or Thing” is the most sequential. A woman is depositing her stuff (children’s teeth, father’s tie rack, etc.) here and there: she is making caches, she says. She has an accident while she is doing it. Her mother is dismayed and furious. There is some likeness with Tim O’Brien’s “The Things They Carried,” minus the war and minus the clever progression of expansive lists that O’Brien handles so well.

Curtis Dawkins’s “Why I Don’t Go Outside” bundles together a series of ruminations on how Nature (the Outdoors, God, etc.) wants to harm us.

Steve Himmer’s “An Encyclopedia of Urban Farming” was as clever-clever as Daniel Nester’s piece in the previous number of Hobart: encyclopedic, playful, dreary. I had to make an honest effort to read it through. I’m not sure I succeeded.

To wrap up, let me just say that over at the Emerging Writers Network there were some discussions with the editor of Hobart about this number of the magazine, here. Hobart is a great project. There are at least one or two remarkable stories in each number, and that’s a lot to say for magazine fiction these days. I’m looking forward to Hobart 12 already. It’s not a themed issue, which is even better.
Hobart