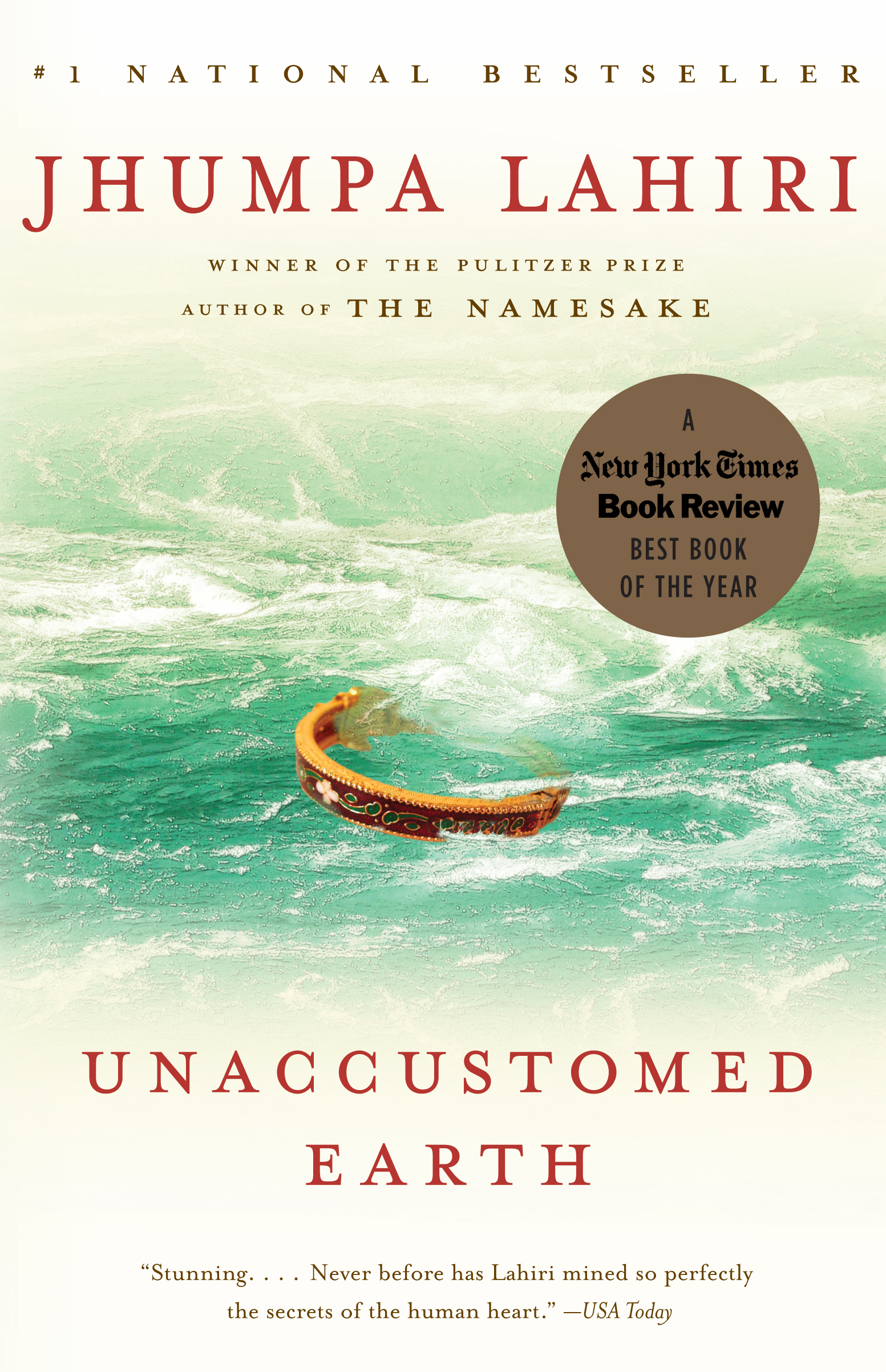 Jhumpa Lahiri’s Unaccustomed Earth enjoys the rare distinction of being a short story collection sold not only in bookstores but also in the cluttered stands of department stores like Wal-Mart. Lahiri is darlinged by the publishing world, turning out bestseller after bestseller. Today’s story will be the title piece from that 2008 collection I just mentioned: “Unaccustomed Earth.” I couldn’t find it online.

Put briefly: it’s a wonderful story. It’s a long story, too: unlike the short short fiction I mentioned a few days ago, Lahiri likes her stories long. The shortest piece of the book takes up 24 pages (it was originally published here), and the longest is the title story, at 57 pages. Even then, I flipped quite quickly through “Unaccustomed Earth.” I wasn’t prodded on by suspense, by the urge to know what’ll happen next, but rather because the language flows so smoothly. There are none of those rough patches I’ve mentioned in stories by Mitchell and Barth. The characters’ insights blend in well with the action, and it all moves along effectively.

The story is about a young American woman of Indian descent (Ruma), who is married to an American man who is not of Indian descent (Adam). They have a son, Akash. Ruma’s mother died recently, and her father—retired (he had been moved by “ambition and accomplishment, none of which mattered anymore” [p. 51])—changed many things in his life: he sold the old family house, he started traveling through Europe. There is another significant change that blossoms into a climax at the end, subtly and persuasively, thrusting itself powerfully into the final paragraphs.

Lahiri has a very good sense of her characters’ voices, aspirations, and reasoning. She threads their thoughts into the narrative to great effect. She does this without presenting philosophically precise solutions, or using a language that would seem foreign to the characters involved. This is an achievement. Many of the most provocative ideas revolve around familiar events and objects. Take this simple description of Ruma’s mother: “Her mother had never cut corners; […] she had run her household as if to satisfy a mother-in-law’s fastidious eye” (p. 22). About Ruma’s mother passing away: “There were times Ruma felt closer to her mother in death than she had in life, an intimacy born simply of thinking of her so often, of missing her” (p. 27). Here’s Ruma’s father, reflecting on the tiresome buildup of stuff that accompanies a family: “He didn’t want to live again in an enormous house that would only fill up with things over the years, as the children grew, all the things he’d recently gotten rid of, all the books and papers and clothes and objects one felt compelled to possess, to save. Life grew and grew until a certain point. The point he had reached now” (p. 53). No need to belabor what that point is; enough is said by mentioning it.

One of Ruma’s central concerns in the story is being pressured by different cultural demands: she is pressed to work 56-hour-weeks, she is pressed to keep Indian values and traditions. Her mother’s disappointment and her father’s taciturn dissatisfaction are powerful motivators. She often finds herself at a loss: “She’d always felt unfairly cast, by both her parents, into roles that weren’t accurate: as her father’s oldest son, her mother’s secondary spouse” (p. 36). She also experiences this tension in the way she is raising Akash: “In spite of her efforts, he was turning into the sort of American child she was always careful not to be, the sort that horrified and intimated her mother: imperious, afraid of eating things” (p. 23).

Finally, I wanted to underscore this apparently simple reminiscence about Ruma’s son: “He was her flesh and blood, her mother had told her in the hospital the day Akash was born. Only the words her mother used were more literal, enriching the tired phrase with meaning: ‘He is made of your meat and bone.’ It had caused Ruma to acknowledge the supernatural in everyday life” (p. 46). There you have a great and simple way of describing what writers do: use words that enrich tired phrases, and thus highlight the supernatural qualities of our day-to-day experience.

My main objection to the story regards Ruma’s father’s voice. The first few times in which the narrative put the spotlight on him (it alternates between Ruma and him), I wasn’t fully convinced. Ruma’s sections seemed much more at ease, more introspective and rich. About halfway through, Ruma’s father’s sections work quite well, too. But those first few times could’ve been compressed and strengthened. Aside from that, though, the story works very well, on many levels.