Showing posts from September, 2009
Show all

When it was first published (by The New Yorker back in 1948 ), Shirley Jackson’s “The Lottery” received a lot of attention. The full text is available online, here , where it tops off the site’s list of “Twenty Great American Short Stories.” I read it in an anthology ( Norton Anthology of Short Fiction ). All of this speaks highly of the story’s enduring acclaim. However, I don’t think it’s aged well. (Please read the story before going on, because I’ll spoil the ending, on whose mystery the entire tale is propped up.) “The Lottery” creeps up on you: it starts as a seemingly bucolic celebration in a small town. You see people walking up to a wooden box and drawing slips of paper to see who’ll win the lottery. The person who wins gets stoned to death. It turns out to be a fertility rite. Both the way to pick people and the way to kill them sound very biblical. They are. There’s a strong sense hovering about that adulterers get stoned in the Bible. Well, yes and no. In Chris
Post a Comment
Read more

“Most dictionaries’ usage notes for if are long and involved; it might be English’s hardest conjunction. From experience born of repeated personal humiliation, I can tell you that there are two main ways to mess up with if and make your writing look weak. The first is to use if for whether. They are not synonyms— if is used to express a conditional, whether to introduce alternative possibilities. True, abstract grammatical distinctions are hard to remember in the heat of composition, but in this case there’s a great simple test: If you can coherently insert an ‘or not’ after either the conjunction or the clause it introduces, you need whether. Examples: He didn’t know whether [or not] it would rain ; She asked me straight out whether I was a fetishist [or not] ; We told him to call if [or not? no] he needed a ride [or not? no]. The second kind of snafu involves a basic rule for using commas with subordinating conjunctions (which are what if is one of). A subordinating conjunction sign
2 comments
Read more

No Samplers Left Behind

Just a quick note to complete unfinished business: when I posted some comments on McSweeney’s 31 , I mentioned it came with a “summertime sampler.” I said I’d probably talk about this sampler later. So here’s later. The sampler is 16 tabloid-sized pages long, and it includes samples from three novels published by McSweeney’s: Bill Cotter’s Fever Chart , Jessica Anthony’s The Convalescent , and James Hannaham’s God Says No . You can read shorter samples of the first two of those novels here and here . I guess a sampler is meant to entice you, so that you can’t wait to get your hands on the full-length novel. With that in mind, the only sample that made me want to read ahead was that of Cotter’s Fever Chart . It’s about a man who recently left the Boll, a psychiatric center. All sorts of foul things happen to him on the outside, from a house without a heater in winter to the same house, whose heater doesn’t switch off now and is thus out to spew mattresses in balls of fire. A
Post a Comment
Read more

On This Summer's Zoetrope

Last week I got a copy of the Summer 2009 edition of Zoetrope: All-Story . Sure, I had read stories from Zoetrope before ( here ’s one I commented on a couple of weeks ago), but I had never held the print edition in my hands. It has a striking cover, and the pages are filled with photography. This abundance of images makes the slender volume quite tiny: there are six short stories in all, one of them two pages long. (About the artwork, well, it’s contemporary; some of the blobs of paint dripping on pages 27-28 were interesting. The guest designer was Antony, from Antony and the Johnsons . ) After I read the first story, I thought I’d be disappointed by this edition. Boy was I wrong. The following four stories were all superb. The first story was “At the Airport,” by Ryu Murakami. A woman is waiting at the airport for a customer who’s grown into her lover and with whom she is now planning to elope. She is divorced, one of the details about her life that we learn as she fills
Post a Comment
Read more

“Quaint” was probably not what Nobel laureate Orhan Pamuk was aiming for with the story “Distant Relations,” published in a recent edition of The New Yorker . (The story is available here .) But “quaint” was the sense I got after reading it. It’s not a bad story. In fact, it kept my interest from start to finish (it’s seven pages long). I wanted to find out the nature and impact of a life-changing event mentioned in the opening sentence. The story is narrated by Kemal, a Westernized Turkish man, who remembers events that happened in Istanbul in the seventies. He’s about to get married to Sibel, a woman who “studied at the Sorbonne” (meaning that she studied in Paris). Kemal is the son of a wealthy and seemingly emotionally detached entrepreneur; Sibel is the daughter of a former ambassador. They have premarital sex, which makes them feel wild and liberal—while also making sure that, when she indeed “gave herself” to the narrator, wedding plans were on the way. What seems quai
Post a Comment
Read more 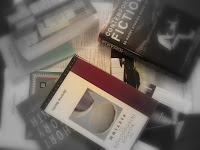 So it’s over. This self-proclaimed short story month, I mean. I went through with it in probably one of my busiest months this year (there were duties everywhere), but I wanted to keep my word, and thus step in on day one and step out 31 posts later. The posts differed: some referred to a single story, some to a couple, some to a whole anthology or a full issue of a literary magazine. I did my best to keep them interesting, at least, and I hope it worked. The aim was to honor the short story, a post a day. I’ll have to take a couple of days now to, you know, breathe and all, after which I’ll post something like a short retrospective. For now, here were the subjects of posts in English (missing numbers are found in the next list, below): 1. Toni Cade Bambara’s “Raymond’s Run” 2. Daniel Alarcón’s “A Circus at the Center of the World” 3. Joshua Ferris’s “The Valetudinarian” 4. Tim O’Brien’s “The Things They Carried” 5. The Best American Nonrequired Reading 2008 7. Aaron G
4 comments
Read more
More posts