Showing posts from May, 2013
Show all

“Every scene, every dialogue should advance the narrative and then if possible there should be a surprise ending.” ( about the most important aspect of the craft of fiction ) “Use the time of a total stranger in such a way that he or she will not feel the time was wasted.” ( one of Vonnegut’s rules for fictional composition ) “The obvious alternative [to writing to please a small group of supporters] is, of course, something to please the  Atlantic ,  Harpers , or the  New Yorker . To do this would be to turn out something after the fashion of somebody-or-other, and I might be able to do it. I say might. It amounts to signing on with any of a dozen schools born ten, twenty, thirty years ago. The kicks are based largely on having passed off a creditable counterfeit. And, of course, if you appear in the  Atlantic  or  Harpers  or the  New Yorker , by God you must be a writer, because everybody says so. This is poor competition for the fat checks from the s
Post a Comment
Read more 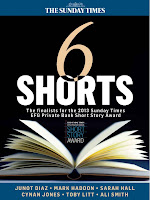 The last story of the Six Shorts anthology, which I started to discuss a few days ago , is called “The Beholder,” by Ali Smith. My enthusiasm has been waning in post after post, and it won’t pick up today. It won’t drop to its lowest level, either. The main character in “The Beholder” is also its narrator: a woman who goes to the doctor because she is having trouble breathing. The doctor checks her out, and then asks about her life. Fine, she says. And after a moment’s thought: “well, my dad died and my siblings went mad and we’ve all stopped speaking to each other and my ex-partner is suing me for half the value of everything I own and I got made redundant and about a month ago my next door neighbour bought a drum kit, but other than that, just, you know, the usual.” So things aren’t peachy. She is given an antidepressant, but tosses the bottle of pills aside when she reads that one of the side effects is depression. She moves on with her
Post a Comment
Read more

As we come to the fifth story in the Six Stories anthology , it may have become apparent that my enthusiasm for these short stories has traced a parabola. It peaked with Sarah Hall's “ Evie ,” and it now continues its downward motion with one that has a wobbly title: “Call It ‘The Bug’ Because I Have No Time to Think of a Better Title,” by Toby Litt. Right off the bat, the title strikes me as overkill. There’s also the fact that the story is made up of a single paragraph. It is freckled with remarks packed inside parentheses: everything from short explanations (“in 2000”, “in London”) to adverbs tacked after a verb (“gradually, subtly,” “convincingly, gradually”) to metaliterary comments (this comes from the narrator directly: “Of course, this isn’t my usual reasoned view – but at the moment I cant, I just can’t”). Please take note of sentence one, which pretty much sets the pace for the rest of the story: “If my mother weren’t dying of ovarian cancer, and I ha
Post a Comment
Read more
More posts