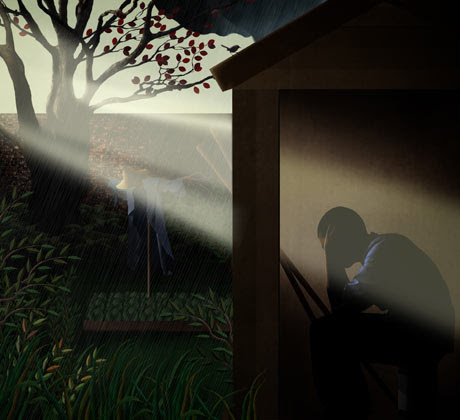 The Guardian had an interesting “Summer short story special,” with stories by authors like Dave Eggers (yes, again) and A. M. Homes. Well, today’s pick for a short story comes from that summer special: it’s David Mitchell’s “The Massive Rat.” It’s available here.

The story is good. It describes a couple (Nick and Lorna) whose marriage is on the verge of collapsing. The story kicks off with snippets of a conversation about divorce, Lorna about to drive off with their child (Fred). It rains, Nick goes out to do some gardening, he smashes a window in a fit of rage (“[s]hark-fins of crashing glass” fall down), and then Lorna shows up again, asking Nick for help with a rat stuck behind the fireplace.

We learn they’ve had some economic troubles (“there’s no denying that the money stuff hasn’t helped the marital stuff”), and Nick has felt like a “Kept Man.” Every bit of casual conversation provokes a riposte aimed at the carotid—or just plain nonsense (after making up a fact on rats, Nick says this about himself: “Classic Nick Briar bullshit: Lorna provokes it out of me, like a laxative”). They verbally abuse each other all the time: “We are learning a lot about contempt, Lorna and me.”

Mitchell can put together some funny phrases. I liked this one, in all its simplicity: “It felt like a humid Friday noon-time because it was.” (The same pattern comes up at a key moment toward the end: “[…] because this is what it was”). The details with which the story is textured are well picked and clever. Some characters (like the lawyer Patrick Beeman) are rather funny.

And yet, those same details and that same humor often grow malignantly and take over entire sentences. The result for us is not always smooth sailing. The action in the first couple of paragraphs seemed briared (that use of the word “gob,” for instance, was absent from Merriam-Webster’s Unabridged and the American Heritage Dictionary, and only showed up in the OED, neatly tucked in at the end of the entry on “gob”; at first I kept misreading it as “amassing”). The end of the rain is announced through a dripping scarecrow, and then we’re off to the garden, advancing to this and through this by spurts.

We get used to this progression, but the kind of language in the story was still, well, very particular. The imagery often becomes so involved, even if it’s brilliant, that the overall sense you get is of looking at the inner workings of the factory, rather than at the factory’s product. It’s cluttered. In this, the story reminded me somewhat of John Barth.

Let me illustrate liberally with examples: “Me and Lorna have sort of Berlinned the house into her zone and mine.” More: “Fourth – and this shook me most of all – Ms I-Will-Survive looked alarmed and needy. In an instant, a prayer was hurtling its way to the headmasterly God of my C of E childhood: ‘Please please please, don’t let anything have happened to Fred.’” Here’s another: “Like Captain Sensible a lifetime ago, I said, ‘What?’” And another: “Waiting at a zebra crossing for an old woman I had one of my Tourette’s Moments. It’s not real Tourette’s Syndrome – it’s a spasm of remembered shame – but it made me whack my knuckles against my temples and shriek like a Bee Gees harpy, ‘I’m so sorry!’” Finally: “Lorna was slicing tomato and basil – we never eat together – but she came to the living room, to avert charges of Not-My-Problemism.” The nouns stringed together with dashes, the heavy use of capital letters, all that slows down the story, while blaring its humor at us.

Still, the story has its good moments, and it’s a good snapshot of a marriage on the brink of disaster.